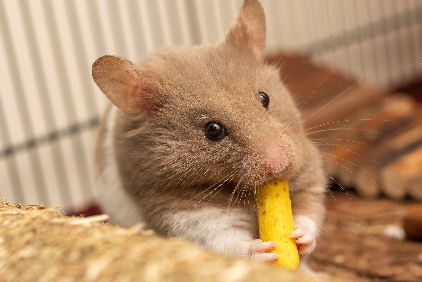 Syrian hamsters have additional danger due to their closely related nature, the presence of lethal genes that can lead to a high or total death rate in their litters and the possibility of infanticide.

Syrian hamsters become sexually mature at around 28 days, however they should not be bred for the first time until 3-4 months of age. A sexually mature female comes into heat approximately every four days. The male must be removed immediately after mating or else the female may fight and kill him.

Syrian hamsters have a very short gestation of 15-17 days and litter sizes can be up to 20 with an average litter size of 8-10. Pups must be separated into same-sex groups at 4 weeks, and kept singularly by 8 weeks.

Due to the over-abundance of animals in rescue centres breeding should be considered very carefully and only undertaken by experienced rodent keepers, who are breeding for the purpose of improving health and temperament with aesthetics as secondary.

Please see our article on When to Breed Rodents: Ethics and Care for more information.