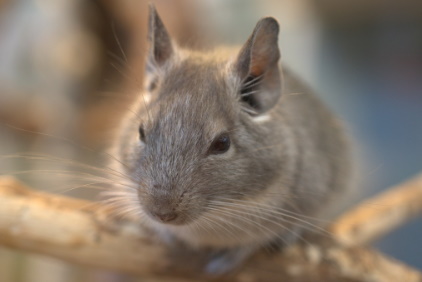 Degus are also known as the common degu, or occasionally as the brush-tailed rat; They have an average lifespan of 6-8 years. Degus are larger than Mongolian Gerbils, typically measuring from 25-31cm with a weight of around 170-300g. The majority of Degus in captivity retain their natural agouti colour, although a blue variant does exist.

Degus are an extremely active, social rodent. In the wild they would live in large colonies so should be kept with company in captivity. A lonely pet Degu has a much lower life expectancy, and quality, than a Degu kept with company. Introducing adult Degus can be very tricky and is best done outside of their natural breeding season (early winter-late spring each year) when they are likely to be less territorial. However this is not recommended if you also have any girls where they can be smelt, as the male degu may fight when the girl comes into season. A neutered male degu can be introduced more easily to a female/females than to another male.

They are naturally diurnal which makes them an easier pet to interact with. They are generally friendly, and very intelligent.

Degus gained prominence in the UK pet trade around 2007, which resulted in a large rescue effort. The long lifespan, complicated diet, large cage requirements and high activity level make them unsuitable as a pet for a very young child or someone unprepared.

Degus and Chinchillas can co-habit, although degus should be provided with a separate area but connected area that they can retreat to if needed. This should only be attempted by a keeper experienced with rodents and would never substitute for company of their own kind.