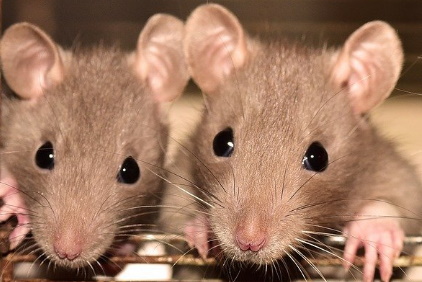 All the varieties listed here are of Fancy Rats and thus can be kept together. The natural 'wild' colour of Fancy Rats is Agouti.

Fancy rats normal ear position is at the top, this is known as top-ear. A variety known as Dumbo is where ears are positioned to either side of the head. As Dumbo and Top-ear are both the same species, they can be kept together. A pet shop or breeder that claims they cannot, should very much be avoided.

Pet Fancy Rats come in a huge variety of colours. These include:

This variety was first imported into the UK on March 2010 and is known as the "red eyed devil" in Europe. These rats begin as red-eyed blacks but the fur lightens to a deep grey as they age. Distinctive features include a pale muzzle and outline around the top of the eye together with paler fur behind the ears. This variety is not standardised in the NFRS just yet.