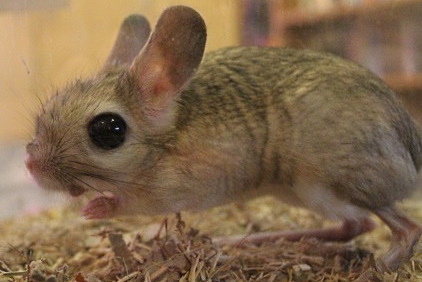 Jerboa species do not breed readily in captivity. The ethical implications of this do mean that the majority that are available will be wild caught. This means that only experienced keepers should be attempting to breed them. No captive animal should be had at the expense of wild populations. This also means the following is comprised of research only, and not direct observation although they do come from people who have had successful jerboa litters.

The following refers predominately to the Lesser Egyptian Jerboa (Jaculus Jaculus) although some aspects may be held in common with the Greater Jerboa.

Jerboas are likely to have their first litter between 6 months to 1 year, although it is possible for a 10-12 week male to impregnate his mother if left together. Serious injuries can occur during mating so animals should be observed closely.

A nestbox is a vital addition to create a burrow-like environment for breeding. A successful design by Harvard Medical School includes a two chambered solid nestbox. The initial entrance has a small low entrance, whereas the internal hole to the second chamber is higher off the ground, to allow adult jerboas to exit but preventing the young from crawling out. A hinged lid allows the keepers to check, although this should not be done during the first two weeks.

Jerboas diet would naturally change during breeding season, where fresh shoots and greens would form a greater part of their diet. In captivity this can be replicated by spreading seeds across the enclosure and misting them a few times a day. This environmental trigger may help prompt mating behaviour.

If the male is found sleeping outside the nestbox he is best moved to another cage as the mother may attack him after giving birth. Gestation is approximately 25 days and litter size is quite small at between 1-5 pups. Pregnancy is not easily to determine due to their small litter size.

Mum should not be disturbed during the first few weeks and additional protein should be offered. Rehydrated lentils can be offered daily as well as ensuring mum has enough fresh produce to get the water she needs. Jerboa pups begin developing fur in their second week, with eyes open at week 4 and leaving the nest around week 5-6. By week 10 they should be weaned and separated into new cages.