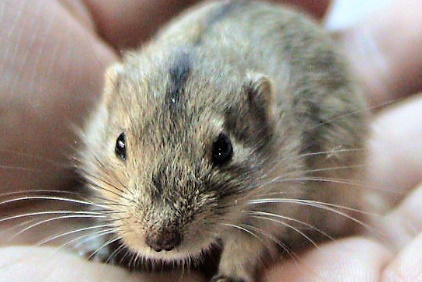 There are currently two main types of lemming in the pet trade, the Steppe Lemming, Lagurus lagurus or the Mediterranean Lemmings (Microtus Guentheri) also known as Gunthers Vole. The information on these pages refers to the more commonly available Steppe Lemming which is the most common domestic vole.

The Steppe Lemming measure around 12cm with a tail of 2cm and an average adult would weigh around 30g. It has small eyes and ears and the coat colour is brownish grey with a prominent black dorsal stripe. The underside is an off-white colour.

The natural habitat of the Steppe Lemming is semi-arid, steppe, and forest-steppe in parts of Western Mongolia, Northwest China and sections of the Ukraine and Russia.

In the wild, Steppe Lemmings live in colonies, partially underground in their lengthy burrows. They are active throughout the day and become more active at night, they are considered diurnal.

Pet lemmings need a large predominately flat environment since they cannot jump well. Cages are not suitable for Steppe Lemmings, since they can easily escape them. They require frequent cage cleans.

They live around 2 years and best kept in same-sex pairs or groups. However they can fight quite viciously so do require careful monitoring, as the occasional individual may be better off kept alone. Pairings are best done from unrelated pairs or trios since it is not recommended to introduce Lemmings to each other once adult. They are highly territorial and fights between adults can be quite brutal.

Steppe lemmings are sugar intolerant meaning that they require a diet so they are not a pet for a beginner to rodents. A normal hamster or gerbil mix would make them very ill, and could even lead to an early death.

They are however quite easy to socialise, have little odour and are quite friendly and inquisitive so make an interesting species to own.