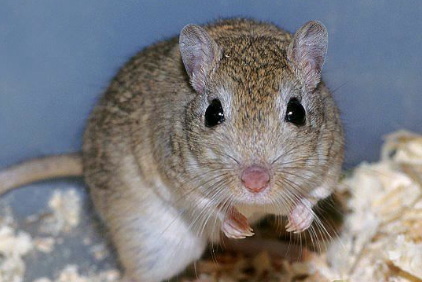 Shaws Jirds breed less readily in captivity than Mongolians with some keepers attributing it to a lack of space in their habitat. Breeding pairs must have a secure nest box and ideally something that mimics their natural burrows in the wild to prevent young from developing stereotypical behaviour such as aimlessly digging to the corner of a tank.

Male and female pairs of Shaws Jirds do not get on well together, with the female often overally territorial towards food and nesting areas making pairings difficult. The most common solution appears to be to pair a young female up with an older male and separate after the first mating. Like Mongolian gerbils Shaws Jirds come into post-partum osterous (heat) hours after giving birth but unlike Mongolians it is important to separate before the male gets an opportunity to take advantage of this. Shaws Jirds sadly do not seem to have the same ability to cope with another litter so soon, with the second lot of babies often neglected sometimes leading to their death.

At around 24-26 days gestation is similar to Mongolian gerbils although pups develop at a faster rate. Litter size is around 3-7 and they can be weaned and separated into same-sex groups between 5-7 weeks of age.