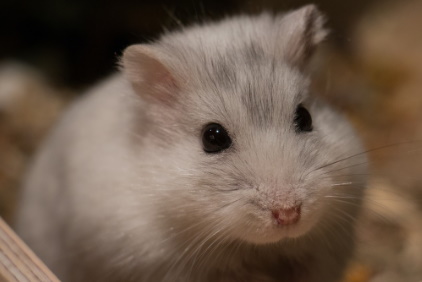 The Campbell's Russian Dwarf hamster is native to the steppes and semiarid parts of central Asia and parts of Northeastern China. It is often confused or mislabelled as a Winter White Hamsters since the two species can interbreed and produce Hybrid Hamsters; this is not recommended and is causing fertility and breeding issues.

The Campbells Dwarf hamster lives around 1-2 years and is sometimes referred to as the Furry or Hairy Footed Hamster. They measure around 10-12 cm and typically weigh between 50-75g. Males tend to be larger than females.

Unlike Syrian Hamsters, Campbell Hamsters are sociable and will live with company, providing they are introduced at a young age. In the wild they would live in pairs or small groups until mature, so equally in captivity it is not advisable to introduce adult animals since they will see this as an invasion of their territory and fights are likely to occur.

The Campbell Hamster have multiple scent glands located on their face, behind their ears, on their cheek pouches and belly. This may be in part, compensation for their rather poor eyesight and terrible depth perception. In a new environment, a Campbells hamster may groom itself to scent its feet - enabling it to use this trail of scent to find its way back to its burrow.

Campbells hamster should have a large cage, if using a tank then a mesh lid must be provided and the tank should not be too tall. They benefit from a dust bath, and a solid based wheel. Multiple nests should be provided, ideally with more than one entrance hole.

Campbells hamsters are prone to diabetes so care should be taken with their diet. Commercial treats and sugary foods must be avoided. Their diet in the wild would consist of various seeds, grains and vegetables but some seed mixes will contain items that should not be given to a Campbell hamster.

This pet has moderate needs and can be a good option for a range of people, including beginners and engaged children. This pet is generally handleable with low health needs and can be treated by most vets. Initial cage costs may be high, but ongoing food and enrichment needs can be met easily.

A responsible adult will always need to be checking that an animal's needs are being met. Moderate needs is contextual; all pets need enough space and enrichment to have a happy life and exhibit a range of natural behaviours. There may be restrictions on owning this animal, make sure you know your local rules.