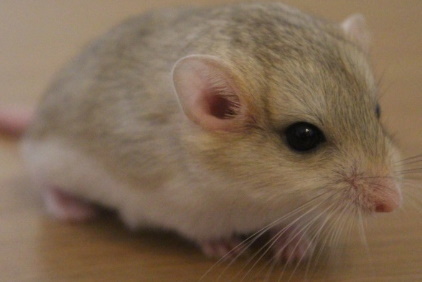 Duprasi are also known as the fat-tailed gerbil and colloquially sometimes as Doops. They are a member of the gerbil family Gerbillinae and are the only member of the genus Pachyuromys. Some people consider them a missing link between gerbils and hamsters.

Duprasi are relatively new to the pet trade and some initial confusion over Algerian and Egyptian inports mean that some hybrids exist. Their wild habitat in Northern Sahara (North-western Egypt, Libya, Tunisia, and Algeria) is composed of sparsely vegetated sands sheets and rocky deserts. They are naturally insectivorous and would live in sandy burrows in the wild.

They live around 2-4 years in captivity and measure around 10cm with 5cm tail. The well rounded tail is used to store water and fat, much like a camel uses its hump and so is often a good indicator of an animals health. Males generally have a thicker tail than females. They are best kept alone.

Coat colour is sandy/yellow although the confusion over hybrids has led to other shades such as light greys. This can also lead to a wide variance in weights with a mature adult potentially weighing in at anything from 30 to 90g.

Duprasi can be very friendly, and like Mongolian Gerbils will have periods of sleep and activity throughout the day, often with dusk and dawn being the most active. I've found they are most active from 10pm. They make an easy pet to handle since they are both slow moving and quite docile.

Duprasi behaviour is more akin to a hamster than gerbil, but they do have some unique traits such as their endearing habit of sleeping on their back, with feet pointing upwards as they can be quite deep sleepers. They are very clean animals and have no noticeable odour. They love the use of a sand bath to help keep their coats from getting greasy.

The Duprasi diet is not that dissimiliar to a normal gerbil. Care should be taken to ensure they do not receive to much moisture in their diet since this can lead to diarrhoea.

Duprasi can be kept in a vivarium or tank providing adequate ventilation is given. They are not good climbers so it is important to give them plenty of floorspace such as a 60x45cm Exo-Terra or a two foot tank. They must have items to hide and nest in and a good quality substrate at least 2 inches deep. Plain bedding can be used as well as a good layer of hay. See more details on Duprasi environment.