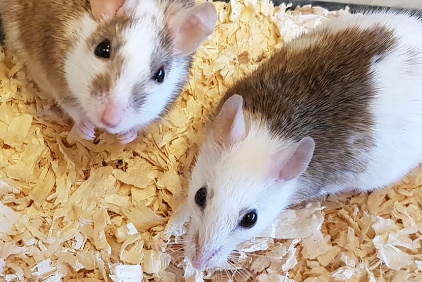 As the soft furred rat moniker suggests they have very long silky fur. They have a range of colourations such as the natural agouti brown, cinnamon and various pied markings. They live between 2-3 years.

They cannot be kept in a plastic or wooden cage since they are such avid chewers. This means a large tank with secure mesh lid is best, filled with plenty of branches for climbing and chewing material. They need a deep level of substrate since they enjoy burrowing and it is important to provide nest boxes, bedding and hay for privacy.

They are omnivorous and need a good rodent mix supplemented with various fruits and vegetables and occasionally with live insects such as crickets or mealworms. Water should always be available.

Multimammate mice would naturally live in colonies and so must be kept with company to avoid depression. All female groups can be more stable than male but aggression between them if well kept seems uncommon.

Multimammate mice can be handled, although they are known to nip more than fancy mice. Some keepers report that their males are more aggressive than females. Care should be taken with handling due to their less docile temperament, but if obtained from an ethical breeder that the chances are your multis will be perfectly friendly.

Sadly, due to the fact that they produce such large, regular litters multimammates are widely bred as feeder breeders for snakes. The 'multimammate' part of their name actually means many breasted, referring to the 18 teats on the female - the most of any rodent.

Multimammate mice are one of the very few examples where rodent species can cohabit, since they can live with normal Fancy Mice. This is usually done in a male mouse/female multimammate and male multimammate/female mouse scenerio since they are unable to interbreed but can also be of the same gender. They have also been known to foster each others young although obviously this would only be done in a scenario where the original mum, or foster mum of the same species, is not available.