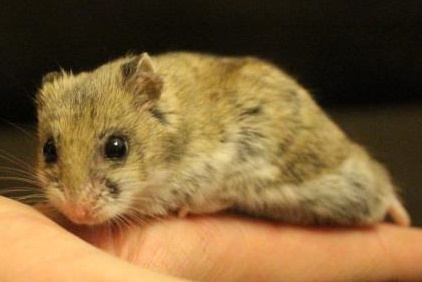 The Chinese hamster originates from the deserts of Northern China and Mongolia. They are not related to dwarf hamsters and are members of a group called ratlike hamsters.

The natural, wild colour of a Chinese hamster is black, with brown lines above and a black stripe down the spine. They would also have a white coloured belly.

Chinese hamsters have a long body, and a larger tail than most hamsters. The males have very prominent testicles, which unfortunately can lead to them being harder to home.

Chinese hamsters are quite small at around 7.5-9cm and length with an average weight of 25-43g. They live around 2-3 years given the correct care.

Like Harvest Mice, Chinese Hamsters can cling to a finger with all four paws. They can be quite nervous, but once tamed are quite calm and unlikely to bite. Females are more aggressive than males and will generally not accept a cagemate after a few months of age. Some keepers have had success with boys living together but spare cages must be on hand in case of a fallout.

Chinese hamsters benefit from a large cage since they would have a large territory in the wild. They need a deep layer of a good quality substrate. Tanks are often recommended due to their slender build. If their cage is wired, bar spacing must be 1cm or less to prevent escapees and should not be used for younger or smaller sized individuals. They should be provided with plenty of nests and hideouts, as well as a solid-based wheel.

They can be fed on a normal hamster mix that is low in sugar and dried fruits, supplemented with fresh vegetables. Good seeds and grains to include are pearl barley, porridge oats, red and green lentils, and millets. Mealworms can be offered as a treat. Scatter-feeding can be used to encourage their natural instinct to forage.