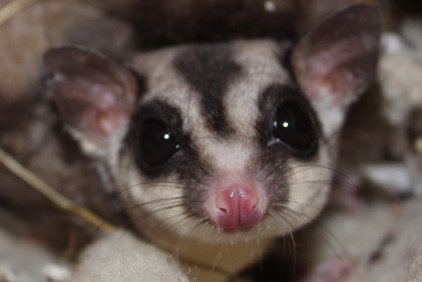 Sugar gliders are not rodents but are a small gliding possum. They are marsupial and are endemic to eastern and northern mainland Australia. New Guinea and Bismarck Archipelego.

Sugar gliders measure around 12-13 inches with 5-6 of this being the tail. They have an eloganted body like a squirrel and very large eyes. The most common colour for a sugar glider is a blue-grey top coat with a black stripe across the spine and a lighter cream colour to the belly, throat and chest. In captivity they live around 10-15 years.

Sugar gliders are highly social, with a single glider prone to a depression that can even lead to death. Sugar gliders must be kept in at least pairs. Provided they have a good background and are acquired at a young age, sugar gliders have the potential to bond quite closely with their owners which has a very strong appeal. Sugar gliders are sometimes erroneously called flying squirrels, this term should actually relate to the Southern or Northern Flying Squirrel which are somewhat rarer in the pet trade.

Sadly, 'glider mills' exist in America where Sugar Gliders are breed in tiny, overcrowded conditions with poor care advice being given to potential owners. Any glider raised in such conditions is likely to be emotionally scarred and have a poor life expectancy - especially if new owners do not think to check the incorrect information they are given on care. There are some fears that this abhorrent practice may spread to the UK.

Sugar gliders require regular handling, especially when young. Sugar glider bonding pouches can help your glider(s) grow accustomed to you and you can also leave a worn item of your clothing in their cage to get them used to your scent. A sugar glider that is unused to handling may display a behaviour known as "crabbing", a sound used as to display fear.

A Sugar Gliders diet is quite complicated and requires a lot of variation and forethought. It can be quite time-consuming and sadly poor nutrition and lack of time are a leading cause of Sugar Gliders health problems or rehoming. Insufficient calcium levels for example can lead to brittle bones and a very ill glider. The eat a range of items, including insects, various forms of nectar and saps, protein, vegetables and fruit. Keepers can prepare food on a weekly or monthly basis and freeze.

They are colloquially known as "suggies" and as you'd expect from a gliding animal will need a very large cage, with a minimum of 4 foot high by 2 x 2 recommended. For more details see Sugar Gliders - Environment.

They are a difficult exotic for a beginner and require a lot of research before buying from a reputable breeder. Care should be taken to "glider-proof" your house for free-ranging, with one of the biggest dangers to a glider being an open toilet lid as they would drown due to being unable to climb out.