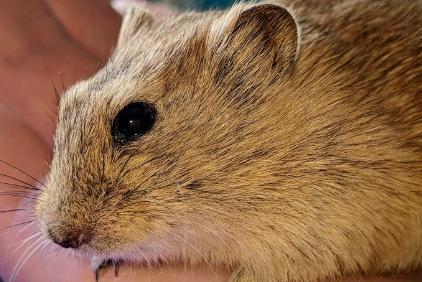 Brandt’s voles are small, sandy-brown rodents whose closest relatives in the pet trade are lemmings and hamsters, although it is in a different family to both. A native to the grasslands and steppes of East Asia - especially Mongolia, where it is considered an agricultural pest - it averages 13 to 15cm long with a lifespan of 4 years. Whilst superficially resembling a Syrian hamster, it is nonetheless smaller and has a light covering of fur on its tail, as well as lacking cheek pouches.

Whilst strictly speaking diurnal, they are active in short bursts throughout day and night, during which time all members of the colony will be awake and foraging. Brandt’s voles are intensely sociable and, during periods of rest, sleep in a pile in a communal burrow, a behaviour originally an adaptation to the cold climates of their native range. As their natural circadian rhythm means they feed several times during the day and are very energetic, they need larger amounts of food and water than other rodents of a similar size.

Whilst not commonly seen as pets, a small population of the voles has been maintained in captivity for a number of years and litters are occasionally available, although when sourcing animals their intense need to live with others must be considered: as a colonial species, they should not be kept in groups any smaller than three individuals.