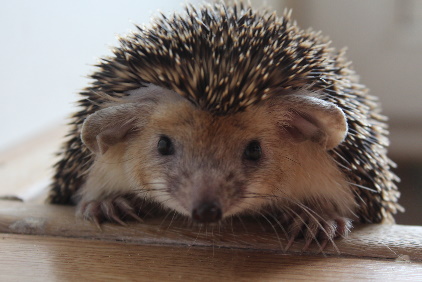 The Long-eared Hedgehog lives in areas ranging that extends from the coast of Libya and Egypt to Asia Minor, northern Arabia, southern Russia, Iran, Pakistan, Chinese Turkistan and Mongolia. Its natural habitat can compose of dry steppes, semi-deserts and deserts. They prefer to live in burrows, sometimes that they have taken from other small mammals. They are typically nocturnal and solitary, coming together only to breed.

Long-eared Hedgehogs are a more difficult species to keep than an African Pygmy Hedgehog. They are less domesticated, so may have a more aggressive temprement. When they are threatened they do not ball up and are more likely to try and run.

They have much longer ears and legs, and a more pointed face - in appearance very similar to the rarer Dessert Hedgegog although the latter often seems to have darker colouration.

Long-eared Hedgehogs are insectivores and benefit from the addition of insects such as crickets, mealworms, morio worms and cockroaches to their diet. Mealworms are a useful treat to handfeed as Long-eared Hedgehogs do need regular interaction to stay used to their human.