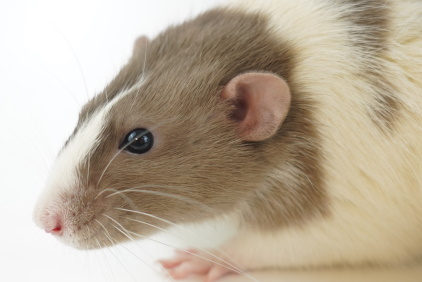 There are a number of exotic rats available to keep in the pet trade, although this may vary due to your country.

Acacia rats (thallomys paedulucus) are medium sized rodents with very long brown tails and a dark black line encircling their eyes which is similar to some species of dormice. They typically have light grey fur. They have a lifespan of around 3 years, with some living to 5, and can live in same or mixed sex colonies relatively peacefully.

Fancy rats (Rattus norvegicus) are a domesticated form of the brown rat also know as the Norwegian rat or Wharf rat. Breeding for the fancy began in 18th century Europe and has its origins in rat-baiting. More unusually coloured rats were spared from this horific fate and began to be bred and sold as pets. In the time since a wide variety of colours and coat types have been selectively bred. Dumbo rats are just Fancy rats with different ear placement, and can still be kept with normal, top-ear rats.

Gambian pouched rats (Cricetomys gambianus) are the largest pet rat, measuring up to 3 feet in length. They are native to central Africa, also known as the African giant pouched rat. Gambian pouched rats are famously used to sniff out unexploded landmines and tuberculosis in Mozambique, Tanzania and Thailand. A separate species of pouched rat called the Emins pouched rat (Cricetomys Emini) is also available, although very rare, and is more slendar in appearance than the gambian. A typical adult would weight between 1-1.4kg and live for 5-7 years. Unfortunately some issues within the UK have lead to a shortened lifespan and difficultly obtaining unrelated animals. Other issues, such as seizures, have arisen within captive animals.

Nile Rats (Arvicanthis niloticus) are also known as the African Gradd Rat and are medium sized rodents with rough, brown fur. They have a dorsal stripe from the head to the base of the tail and are infrequently seen available as pets.