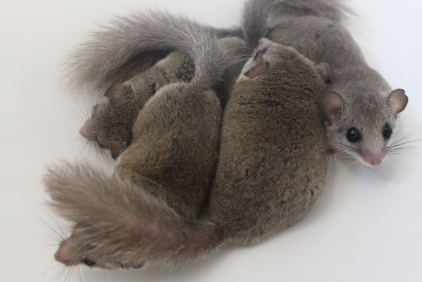 Dormice are small omnivorous rodents that typically feed on fruits, berries, nectar, nuts and insects. They cannot digest vegetable matter as they lack a cecum. Teeth are similar to squirrels, and they are considered mouse-like in appearance although unlike mice they have furred tails and fur on the inside of their ears. This may be due to the need to conserve heat during hibenation.

The only native dormouse in the UK is the Hazel Dormouse (Muscardinus avellaranius), which is not available to the pet trade and is protected under the Wildlife and Countryside Act.

The edible dormouse  or fat dormouse (Glis Glis) is an invasive species that was accidentally introduced to the UK in 1902 to Tring in England.

The most common dormouse available in the pet trade in the UK is the African Pygmy Dormouse (Graphirus Murinus) which is a small, grey dormouse measuring around 15cm including tail. They are most active at dusk and dawn, must be kept alone and are not easily handleable. They can also be known as African Dwarf Dormice, Woodland Dormouse, and sometimes Egyptian dormouse. African Pygmy Dormice belong to the family Gliridae.

The rarer Asian Garden Dormouse (Eliomys quercinus) is much larger, at around 10-15cm in length plus 8-14cm for their long fluffy tail. They have a striking dark mask across their face and prominent, upright ears. They are also known as the Asiatic Garden Dormous and collequially as AGD. They are sometimes confused with the Forest Dormouse or European Garden Dormouse.