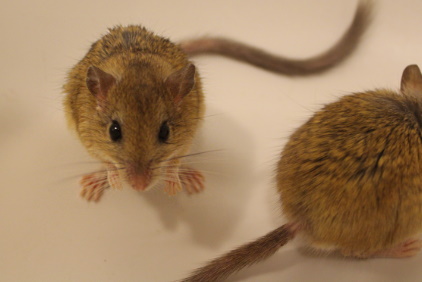 Jirds belong in the rodent genus Meriones, the most commonly of which is the Mongolian Gerbils which is also known as the clawed jird. The species most commonly referred to as simply Jird is the Shaws Jird which looks very similar but is much larger than the Mongolian. However, not all gerbils are Jirds although all Jirds are gerbils.

In the wild they live in areas ranging from Northern Africa to Mongolia and typically inhabit arid regions. Natural habits including clay and sandy deserts and steppe and some slightly wetter regions.

In the pet trade, aside from the Clawed Jird, the most numerous is currently the Shaws Jirds. Other types include Bushy Tailed Jirds, Libyan Jirds, Persian Jirds, Sundevalls Jirds and Tristrams Jirds.

Jirds have adapted to have furred feet which protect them from hot sands. They also have a furred tail and furry ears. Other gerbil species that are jirds include the Midday gerbil and the Indian desert gerbil and the Midday gerbil. The Fat-tailed Gerbil/Duprasi is sometimes called a Jird as is the Bushy-Tailed Jird although neither belong to the family Meriones.

Jirds are very active and curious rodents and need a large habitat. A 4ft x 2ft glass tank with secure wood or mesh lid is good for a pair although they will benefit from more space so ideally this would have a topper. They must not be kept in plastic cages as they are avid chewers and may easily escape. Plastic can also cause blocked intestines if ingested.

A good setup should allow a good depth for digging as well as items like a sand bath, solid-based wheel and at least one area for nesting. They are also good climbers so climbing toys, branches, ropes and parrot toys make good furnishing for their cage. Wood branches in particular make a good addition as this also gives them something to gnaw upon.

Jirds are very curious and intelligent who can become very friendly towards their owners. They can also be trained to follow simple commands such as responding to their name or climbing your arm although this will not stop them chewing through wires whilst free-ranging! They have more powerful teeth than Mongolian gerbils and care must be taken to remove any wires or easily damaged items away from an inquisitive Jird.