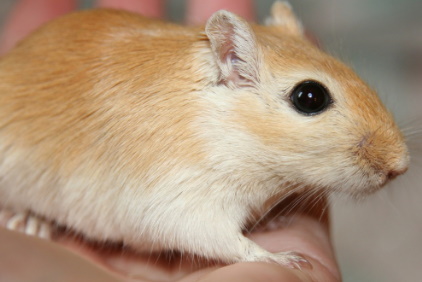 The wild colour of Mongolian gerbils is Agouti and selective breeding has given the pet Mongolian gerbil dozens of different coat colours in captivity. These include basic coat colours such as Argente Cream, Argente Golden, Black, Dove, Golden Agouti, Grey Agouti, Lilac and Slate.

At between 8-2 weeks gerbils will moult for the first time and with some colourations this can result in a change of colour. The most drastic example is with the Nutmeg as featured on the right, as the orange will gradually fade as the brown ticking of the coat becomes more prominent.

Gerbil eyes come in black, wine (black with a reddish tint), ruby (deep red) and pink. There are no albino gerbils - these are either pink eyed whites or red eyed whites.

Gerbils with pink or ruby eyes can have poorer eyesight that those with black, and sometimes you can observe a pink-eyed gerbil rocking slightly which shows they are having difficult focusing. If this is observed in a black-eyed gerbil then it should be investigated as it could be a sign of an ear infection or other illness.

In addition to the basic colours: