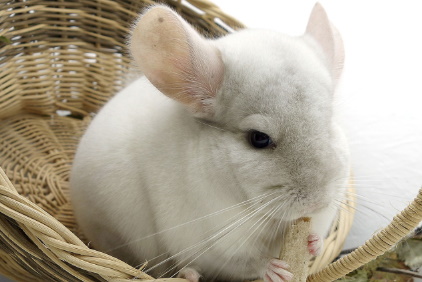 Chinchillas are native to the Andes mountains in South America and belong to the family Chinchillidae. There are two living species of Chinchilla, Chinchilla brevicaudata, sometimes known simply as Chinchilla chinchilla, and Chinchilla lanigera. Both species are sadly very rare in the wild due to hunting for their fur. Although this practice is now outlawed, there are still some fur-farms that breed captive chinchillas to be killed for fur coats. It takes over 100 chinchillas to make a single coat.

The Chinchilla lanigera species still has a very small population in the wild and it is this species from which the domestic pet-form is thought to have derived. The physical difference between the two species are slight with the Chinchilla chinchilla having a shorter tail, thicker neck and shoulders and shorter ears.

Chinchillas measure around 12 inches long, with a fluffy tail measuring around 5-6 inches. Females are usually larger than males, and weight ranges from 500 to over 700g. They are one of the longer lived rodents, with a lifespan of around 15-20 years.

In the wild Chinchillas would live in burrows or rock crevices. They are agile jumpers but not good climbers, and when considering your pet Chinchillas environment it is worth remembering that they are rock-hoppers more than tree climbers so floor space is more important than cage height. In fact Chinchillas can be badly injured by a fall from a tall cage.

Chinchillas live in large groups, known as herds in the wild and in captivity should be kept with friends. Introducing new Chinchillas can be tricky, and care should be taken to research proper introduction methods.

Chinchillas are not always an easy pet to keep, since they have some special requirements. Their lack of ability to sweat for instance, means that they must be kept below 25℃ to avoid risk of heat stroke. Warning signs of a hot chinchilla include red ears, since this is where their direct blood flow to to help reduce heat.

They are very clean animals and require a large dust bath. They must not get wet, since their dense fur does not dry readily in air and so could develop fungus growth or fur rot. The density of their fur resist parasites such as fleas however, and the low levels of loose dander mean they are hypo-allergenic.

Chinchillas do require a strict diet since they would have a limited range of food in the wild and are not good at digesting fatty foods, high protein, or too many green plants.