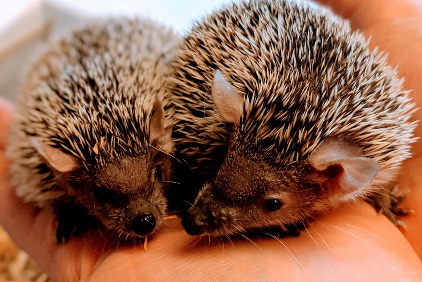 Unlike the much larger African Pygmy Hedgehogs, Tenrecs do not often ball up Their spikes are less prominent than hedgehogs and they are generally not as noisy, though they do make a huffing sound when distressed.

With regular handling, your Tenrecs can become very happy being handled. They very rarely bite and are very confident animals. They do not move especially fast, so are easy to handle whilst walking around. Some keepers like to have them in a pocket or a bonding pouch as they do their normal daily routine, especially during the winter months when they are naturally more sleepy. A Tenrec in torpor will eat rarely, if at all for weeks on end, but it is important to ensure they still have a regular source of cat biscuits and a water source for the occasions when they do wake up for brief patches.

Tenrecs naturally will be more sleepy during the day, as they are nocturnal animals. They swiftly get used to a feeding routine and will charge eagerly towards you at feeding time, especially if you are offering a particular favourite. Many Tenrecs can be trained to take livefood from a pair of tongs. Tong feeding can be a very useful tool to coax a reluctant animal to eat and is a safe way to get a pet Tenrec used to taking food from you, without the risk of bitten fingers from their enthusiasm!

Female tenrecs can be kept together, but male tenrecs cannot be kept together as they are territorial and will fight. If keeping multiple, you must have enough bowls and items to avoid fighting. If mixed-sex, the male tenrec will become more aggressive during the breeding months in spring. Female tenrecs may mount each other as dominance behaviour; it is important to note that the only way to accurately sex a tenrec is via a DNA test using saliva. Female tenrecs have a cloaca (a single reproductive, intestinal and urinary opening) rather than the separate openings most typical mammals have. From 6 months onwards, visual differences between the sexes appear - such as the male's broader face and puffy rings around the eyes. Males can secrete a milky white substance from their eyes, however, some females do also do this and sexing visually is not fully accurate. A DNA test using saliva is the only way to be sure of your pet tenrec's sex.

As tenrecs are nocturnal, is best to handle your tenrec more in the evenings. Pet tenrecs enjoy climbing up your shoulder and may choose to settle in a pocket, or in a sleeve, if sleepy. Pet tenrecs don't seem overally fussed about toys or playpens but may enjoy exploring especially if you hide favourite food treats in cardboard tubes or similar items.